Taoist Views of the Human Body Meditation on the Red Child (chizi),
an image of the true self

Three main terms define the traditional Chinese views of the human body. The first, ti or "body," designates the physical frame as an ordered whole made of interdependent parts. The second, xing or "form," is especially complex; it should be understood in contrast to the idea of “formlessness” (wuxing), which is a property of the Dao. "Form," from this point of view, refers to the embodiment as the feature that identifies each entity in the "world of form", distinguishing it from — and relating it to — all other entities. The third term, shen or "person," denotes the whole human being, including non-material aspects ranging from thinking and feeling to personality and function in society. (See the article "Chinese Terms for 'Body'".)

These terms show that the Western notion of "body" as physical structure is inadequate to convey the complexity of the Chinese views. The Taoist views are further enriched by significant varieties among different traditions. In the absence of a single way of seeing the body shared by all Taoist traditions, this article outlines some of the main themes that emerge from different contexts.

● A Japanese Alchemical Chart of the Human Body

The human body and the state are two microcosms related not only to the macrocosm but also to one another. (See ☞ macrocosm and microcosm.) The body is often described with bureaucratic metaphors, and governing the state is often likened to self-cultivation. This analogy runs throughout Heshang gong's commentary to the ☞ Daode jing and is restated in later texts. One of Heshang gong's relevant passages reads:

At the center of the bureaucratic metaphor are the five viscera (wuzang), described as "offices" (or "officers," guan) in both Taoist and medical texts including the Huangdi neijing (Inner Scripture of the Yellow Emperor; Suwen, sec. 3.8).

Taoism adds much to the theory of the correspondence between cosmos and human body, beginning with descriptions that focus on ☞ Laojun, the divine aspect of Laozi (☞ pictures). According to the Laozi bianhua jing (Scripture of the Transformations of Laozi), the Kaitian jing (Scripture of the Opening of Heaven), and other texts, Laozi already exists at the beginning of the formation of the cosmos and reappears throughout human history, transforming his body each time. In other instances, the cosmos itself is seen as the body of Laozi, a theme that appears to have originated in early myths concerning Pan Gu, the Chinese "cosmic man". A text quoted in the Buddhist Xiaodao lun (Essays to Ridicule the Dao) describes the cosmic body of Laozi as follows:

Laozi transformed his body. His left eye became the sun; his right eye, the moon; his head, Mount Kunlun; his beard, the planets and constellations; his bones, the dragons; his flesh, the quadrupeds; his intestine, the snakes; his stomach, the sea; his fingers, the five peaks (wuyue); his hair, the trees and the herbs; his heart, the Flowery Canopy (huagai, i.e., Cassiopea in heaven and the lungs in the body); and his kidneys, the Real Father and the Real Mother of humanity.

The Body as Residence of Gods and Spirits 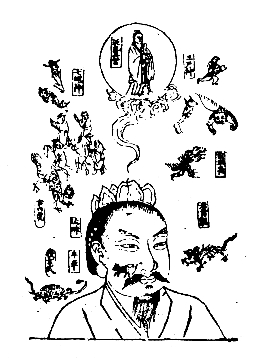 The spirits of the five viscera (liver, lungs, kidneys, heart, and spleen) have a human shape and the texts provide details on their names, heights, garments, and functions. Since the earliest descriptions, found in the Taiping jing (Scripture of Great Peace), these details are provided as support for meditation: visualizing and nourishing the ☞ inner gods causes them to stay in their corporeal abodes and perform their functions, while their departure would result in illness and death. Extended descriptions of the inner deities are found in the Huangting jing (Scripture of the Yellow Court) and especially in the ☞ Laozi zhongjing (Central Scripture of Laozi), and were later developed by the ☞ Shangqing school of Taoism. The Huangting jing describes the gods of the five viscera and of the niwan, the upper ☞ Cinnabar Field (dantian) located in the region of the brain. The Laozi zhongjing features a group of deities who dwell in different regions of the human body, all of whom are different forms taken by the Great One (Taiyi). In both texts, the deities of the viscera perform administrative functions within the body, establishing a link with the views of the medical texts referred to above.

In other instances, the viscera are the seats of impersonal forces. According to the Heshang gong commentary and to medical texts, the hun "soul" (representing the Yang components of the human being), the po "soul" (representing the Yin components), the essence (jing), the spirit (shen), and the Intention (yi) respectively reside in the liver, the lungs, the kidneys, the heart, and the spleen. Elsewhere, hun and po are represented in a divinized form; in this case, the hun are said to number three and the po seven. They are often mentioned with the "three corpses" and "nine worms" (sanshi and jiuchong), malevolent spirits who report the faults and sins of the individual in which they dwell to the Director of Destinies (Siming). Accumulating merit through good actions, abstaining from cereals, and performing rites on the gengshen day (the 57th of the sexagesimal cycle) were among the methods used to neutralize them.

The Body as Mountain and Landscape The body as a mountain.
Painting by Liang Kai
(13th century).

The Wushang biyao (Supreme Secret Essentials, 41.3b) associates the Authentic Talismans of the Five Emperors (wudi zhenfu) with the five planets in heaven, the five sacred mountains on earth, and the five viscera in the human body. The body itself is often represented as a mountain. Liang Kai (13th century) painted a famous scroll that depicts an immortal — possibly meant to be Laozi himself — as a mountain, using the technique normally applied for painting landscapes (see picture on the right). Images of the body as a mountain are also found in Taoist texts (see an example). They illustrate loci in the body that are important for the practices of Nourishing Life (yangsheng) and ☞ Internal Alchemy (Neidan). Some of these sites are represented as palaces that function as headquarters for the administration of the inner body: here too the metaphor of the government of the country as the government of the body is apparent. In turn, the visual depictions of the body as a mountain are related to the best-known Taoist image of the inner body, the ☞ Neijing tu (Chart of the Inner Warp), which maps the body as a landscape whose features (e.g., the watercourse, the mill, the furnace) have symbolic meanings in Neidan.

The Body in Internal Alchemy

The ☞ Neidan view of the body is complex, and remarkable differences occur among various subtraditions and authors. In general, the main components of the Internal Elixir (Essence, Breath, and Spirit, or jing, qi, and shen), as well as the tripod and the furnace, and even the fire itself, are said to be found within the human being. Beyond this basic premise, Neidan shares some of the views outlined above and dismisses others. For instance, it inherits from traditional medicine the importance of the Control and Function channels (dumai and renmai) that play a central role in the circulation of Essence. On the other hand, Neidan practice does not involve visualizing the inner gods.

Wang Jie (14th century), Commentary on the Mirror for Compounding the Medicine

Neidan, however, is more than a technique, and the importance it gives to immaterial notions such as Nature and Existence (xing and ming), or inner Nature and individual qualities (xing and qing), shows that its focus is not the physical body. Various concepts and practices take on different meanings at different levels, from the physical to the spiritual and beyond this distinction. An example is the Mysterious Barrier (xuanguan), which according to different authors is located between the eyebrows, between the kidneys, in the gallbladder, in the navel, or elsewhere, while others say it has no precise location in the body. As Li Daochun (fl. 1288-92) remarks: "The Mysterious Barrier is the most mysterious and wondrous pivotal pass (jiguan). How can it have a fixed position? If you place it in the body (shen), this is not correct. If you separate it from the body and search for it outside the body, this is also not correct".