An Introduction to Taoist Alchemy 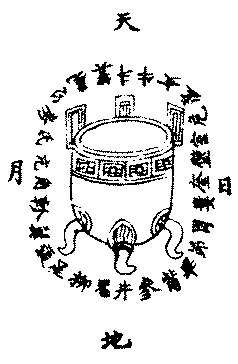 Alchemical tripod surrounded by the names
of the twenty-eight lunar lodges (xiu)
and by the graphs for Heaven 天 (top), Earth 地
(bottom), Sun 日 (right), and Moon 月 (left)

Besides a new variety of Waidan, the ☞ Cantong qi also influenced the formation of Neidan, whose earliest extant texts date from around 700 CE. The authors of several Neidan treatises refer to their doctrine as the Way of the Golden Elixir (jindan zhi dao). While they are often fond of stating that their tradition synthesizes the Three Teachings (sanjiao), i.e., Confucianism, Buddhism, and Taoism, the components of Neidan are actually much more numerous. Its texts borrow teachings from the Daode jing, vocabulary from the Zhuangzi, cosmological emblems from the Book of Changes, methods from early Daoist meditation, physiological practices (especially breathing) from the disciplines of Nourishing Life (yangsheng), views of the human body from traditional medicine, alchemical language from Waidan, doctrinal notions from Buddhism, and concepts from Confucianism and Neo-Confucianism. The borrowing occurs to different degrees of extent and depth according to the various subtraditions and their individual representatives.

The functions of these main components are clearly distinguished in the doctrinal treatises of Neidan. In particular, their authors point out that the Neidan teachings can only be understood in light of those of the Daode jing (which they call "the origin of the Way of the Golden Elixir"), and that cosmology provides "images" (xiang) that serve "to give form to the Formless by the word, and thus manifest the true and absolute Dao" (Li Daochun, late 13th century, in his Zhonghe ji, chapter 3). Alchemy, therefore, uses the language and images of correlative cosmology to explain the nature of the cosmos and its unity with the absolute principle that generates and regulates it. Its final purpose, however, is to "go beyond Yin and Yang": images and metaphors play and important value and function, but offer only temporary supports.

● A shorter Introduction to Taoist alchemy

Several authors emphasize that the Internal Elixir is possessed by every human being and is a representation of one's own innate realized state. Liu Yiming (1734-1821) expresses this view as follows:

Borrowing two terms from the Cantong qi, which in turn draws them from the Daode jing, Liu Yiming often mentions "superior virtue" (shangde) and "inferior virtue" (xiade) in his writings. These two terms are related to "non-doing" (wuwei) and "doing" (youwei) according to the Daode jing. Superior virtue is the way of "non-doing": one immediately realizes the original "celestial reality" (tianzhen), which is never affected by the change and impermanence that dominate within the cosmos. Inferior virtue, instead, is the way of "doing" the Neidan practice in order to "return to the Dao." Liu Yiming states, however, that the latter way, when it comes to achievement, "leads to the same goal as superior virtue" (Commentary to Cantong qi).

"Inversion" and the Three Stages of the Neidan Practice

While the Neidan practices are framed in ways that differ, sometimes noticeably, from one another, the idea of "inverting the course" (ni) is common to all of them. In the most common codification, the practice is framed as the reintegration of each of the primary components of being, namely Essence, Breath, and Spirit (jing, qi, and shen), into the one that precedes it. This process culminates in the "reversion" (huan) to Emptiness (xu, or the Dao. The typical formulation of this process is in three stages (see ☞ an article on the stages of the alchemical process):

As shown in the table below, Li Daochun (late 13th century) relates these stages to the passage of the Daode jing that states: "The Dao generates the One, the One generates the Two, the Two generate the Three, the Three generate the ten thousand things." In Li Daochun's explication, the three stages of the Neidan practice consist in reverting from the "ten thousand things" to the Dao. In this way, the gradual process that characterizes Neidan leads to the realization of the non-duality of the Absolute and the relative. 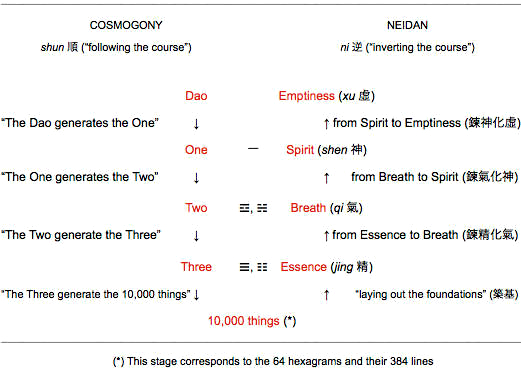 For more details on this subject, see the article ☞ Beizong and Nanzong: The Northern and Southern Lineages of Neidan

In Song and Yuan times (ca. late 10th-14th centuries), the history of Neidan identifies itself with the lines of transmission known as Nanzong (Southern Lineage) and Beizong (Northern Lineage). The beginner of Nanzong was Zhang Boduan (11th century), and the beginner of Beizong was Wang Chongyang (1112-1170). The textual foundation of the Southern Lineage was provided by the Wuzhen pian (Awakening to Reality), a work in poetry by Zhang Boduan. Both lineages placed emphasis on the cultivation of xing and ming, which constitute two central notions of Internal Alchemy. Xing refers to one's original Nature, deemed to be innately awakened but also obscured by the functioning of the mind in the conditioned state. Ming denotes the "imprint" that each individual entity receives upon being generated, and which may or may not be actualized in life due to one's interaction with the world through the body and the senses. The Northern and Southern lineages were distinguished by the relative priority given to either xing or ming in the context of their "conjoined cultivation" (shuangxiu).

During the Ming and Qing dynasties, the Neidan tradition divided itself into several schools. One of the greatest masters of this time was Liu Yiming (1734-1815), who in his works propounded an entirely spiritual interpretation of his tradition.