Zhuangzi — whose name was Zhuang Zhou — probably lived between 370 and 280 BCE. He wrote the "Inner Chapters" (1-7) of the eponymous work, which form the first of its three main parts. The two other parts, namely the "Outer Chapters" (8-22) and the "Miscellaneous Chapters" (23-33), contain writings by different groups of authors.

Zhuangzi's view of the Dao is in agreement with Laozi's view: "The Way has its reality and its signs but is without action or form. You can hand it down but you cannot receive it; you can get it but you cannot see it. It is its own source, its own root. Before Heaven and Earth existed it was there, firm from ancient times" (ch. 6; trans. Watson, The Complete Works of Chuang Tzu, 81). 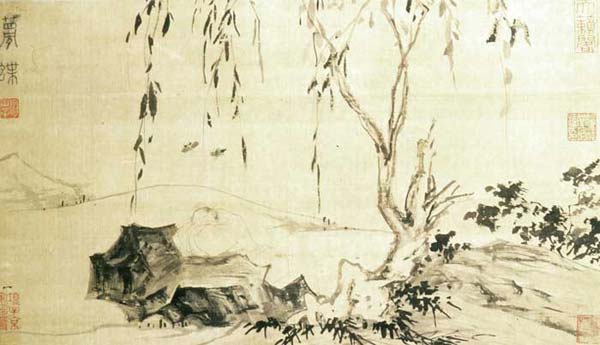 Zhuangzi and the Butterfly Dream.

However, Zhuangzi repeatedly brings forth the issue of whether and how the Dao can be known. As the Dao is the absolute, it cannot be made an object; therefore its knowledge cannot be attained by the ordinary mind, which functions by establishing distinctions between "self and other," "this and that," "right and wrong," and other relative concepts (ch. 2; Watson, 36-49). Zhuangzi's analysis of the human mind is in fact an epistemology: since the Dao is ultimately unknowable through the ordinary mind, there is only one way to know it: through "the knowledge that does not know" (ch. 4; Watson, 58).

The human ideal of Zhuangzi reflects this view: "The True Man (or realized person, zhenren) of ancient times did not rebel against want, did not grow proud in plenty, and did not plan his affairs . . . [He] was able to climb all the way up to the Way . . . [He] knew nothing of loving life, knew nothing of hating death" (ch. 6; Watson, 77-78). In the Zhuangzi, the theme of "inner freedom" receives more emphasis compared to the Daode jing: freedom from social rules, from ingrained patterns of thought, from "essentialism" (the belief that things have permanent characteristics that make them what they are), and from conventional "self-identity."

In the "Inner Chapters," the refusal to elevate ethics to a primary principle follows the views of the Daode jing: "The way I see it, the rules of benevolence and righteousness and the paths of right and wrong are all hopelessly snarled and jumbled" (ch. 2; Watson, 45-46). In agreement with this view, Zhuangzi is disillusioned about the possibility of using ordinary ethical virtues as a basis for politics and government: "To try to govern the world like this is like trying to walk the ocean, to drill through a river, or to make a mosquito shoulder a mountain!" (ch. 7; Watson, 93; see also 66-67). For Zhuangzi, the enlightened ruler is the one whose achievements "appear not to be his own doing." Thus "the people do not depend on him . . . [and] he lets everything find its own enjoyment" (id., 94). The speaker of this passage is Laozi himself, whose views on "non-doing" in government are accepted by Zhuangzi.

The Zhuangzi began to have a noticeable influence on the later Taoist tradition from the 4th century CE, when it became one of the sources of inspiration for the Shangqing (Highest Clarity) school of Taoism. Since then, this work has contributed an impressive number of ideas, concepts, and terms to later Taoist work. These include the "fasting of the mind" (xinzhai; ch. 4; Watson, 54-58) and the "sitting and forgetting" (zuowang; ch. 6; Watson, 90-91), two expressions that in later Taoism denote methods of self-cultivation, but in the Zhuangzi describe the inner state of the realized person.