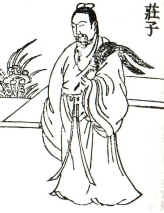 Deemed to be one of the masterpieces of Chinese literature, the Zhuangzi (Book of Master Zhuang) differs from the Daode jing from the point of view of its formal features, and mainly consists of stories, anecdotes, and reflections. But in spite of differences of form and emphasis, the two texts present the same view of the Dao and its relation to the world. Virtually nothing is known about Zhuangzi, who probably lived in the late 4th century BCE and is almost certainly the author of only the seven so-called "Inner Chapters" of the text that bears his name. His work has provided Taoism with doctrines, notions, and technical vocabulary throughout its history.

Great Clarity and Without Beginning

Great Clarity asked No-Limit: "Sir, do you know the Dao?" and No-Limit replied: "No, I don't know it." Then again he asked Non-Doing, and Non-Doing replied: "Yes, I know the Dao." Great Clarity asked: "Sir, as far as you know, does the Dao have any measures (shu)?"(1) He replied: "Yes." "And what are those measures?" "I know that the Dao can be honored and can be vilified, that one can join with it and can part from it. These are the measures through which I know the Dao."

There is no asking about the Dao, and there is no response to that asking.

Then Without Beginning said: "Those who respond to questions about the Dao are those who do not know the Dao. And although one may ask about the Dao, one never hears about it. There is no asking about the Dao, and there is no response to that asking. Asking about what cannot be asked is to reach the limit of asking; responding to what cannot be responded is to lack the inward. One who lacks the inward and attends to questions that have a limit will not contemplate space and time outside, and will not know the Great Beginning inside. Therefore that person will not reach beyond Mount Kunlun and will not roam in the Great Void."

(1) Shu primarily means "number" or "figure," but the point of this question is whether the Dao has forms. Compare Zhuangzi 17: "The Formless is what cannot be divided by measures." The answer given by No-Limit testifies to the formlessness of the Dao; the one given by Non-Doing refers to the Dao as something that can be apprehended as an object.

"Flowing into the Form"

In the Great Beginning there is Non-being: there is no Being and there are no names. This is where the One originates: there is the One but there are not yet forms. Things obtain it and are generated: this is called Virtue (de). In the not-yet-formed there are divisions but no intervals: this is called Mandate (ming). There is a flowing movement (liudong) that gives life to things. Things achieve their life principle (shengli): this is called Form. The form and the body harbor the spirit, each according to its regulating norm: this is called Nature (xing).(1)

(1) Ming, literally translated above as "mandate," is the "imprint" that Heaven confers to each entity, including its life span, its "destiny" (also included in the notion of ming), its function in the world, and the assigned allotment of vital energy. Xing or "nature" is the parcel of spirit (shen) that each living being harbors in its individuality, which the Zhuangzi here defines as "form and body."

Zhuangzi, chapter 12. Translation published in Fabrizio Pregadio, "The Notion of 'Form' and the Ways of Liberation in Daoism," Cahiers d'Extrême-Asie 14 (2004): 111.

What is shameful about the state of dividedness(1) is that one wants to add to it; and what is shameful about adding to it is that one acts for this purpose. Thus, by going forth [into life] without returning [to the Dao], one appears like a ghost. This is because by going forth one does find something, but what one finds is death: one is extinguished but still has actuality, just like a ghost.

Zhuangzi, chapter 23. Translation published in Fabrizio Pregadio, "The Notion of 'Form' and the Ways of Liberation in Daoism," Cahiers d'Extrême-Asie 14 (2004): 106-7.

The Boundary that is not a Boundary

That which makes things things has not boundary between itself and things . . . Having a boundary with what has no boundary means that the boundary is not a boundary.

That which makes things things has not boundary between itself and things; it is things that have boundaries, and those are called the boundaries of things. Having a boundary with what has no boundary means that the boundary is not a boundary. We speak of the filling, emptying, withering, and dying of things. What makes them full or empty is neither full nor empty; what makes them wither and die has no withering or death; what causes them to begin and end has no beginning or end; and what causes them to accumulate or scatter has no accumulation or scattering.

Zhuangzi, chapter 22. Translation published in Fabrizio Pregadio, "The Notion of 'Form' and the Ways of Liberation in Daoism," Cahiers d'Extrême-Asie 14 (2004): 101-2.

The Virtue of the Sage

Inspiring and expiring while emitting the sounds chui and xu, exhaling the old and inhaling the new [breath], hanging like a bear and stretching like a bird, these are only methods for longevity. This is what the masters who practice daoyin, the people who "nourish their form" (yangxing), and those who pursue a longevity like Pengzu's are fond of.

Now, being lofty without having ingrained ideas, practicing self-cultivation without relying on benevolence and righteousness, administering the government without looking for merit or fame, being peaceful without [the need of] contemplating rivers and oceans, being long-lived without practicing daoyin, means forgetting everything but possessing everything. Calmly residing in the Ultimateless while having all pleasing things follow oneself — this is the Way of Heaven and Earth, and is the virtue of the sage.

Zhuangzi, chapter 15. Translation published in Fabrizio Pregadio, "The Notion of 'Form' and the Ways of Liberation in Daoism," Cahiers d'Extrême-Asie 14 (2004): 119.