Chart of the Fire Phases

The chart reproduced below comes from the Yiwai biezhuan (The Separate Transmission of the Book of Changes), written by Yu Yan in 1284. This work contains several cosmological charts, followed by passages drawn from the Book of Changes and commented by means of quotations from the ☞ Cantong qi (The Seal of the Unity of the Three), the most important text in Taoist alchemy.

Charts like this one have a long history in China. They are used to show the correspondences between different ways of marking space and time, such as the directions, the twelve primary hexagrams (each of which is associated with one month), the days of the moon cycle, the lunar mansions, and so forth. Different cosmological disciplines use these charts in different ways — e.g., for astronomical calculation or divination. In alchemy, the correspondences shown by these devices are mainly used to establish the "fire phases" (huohou), i.e., the cycles of firing in External Alchemy (Waidan) and the cycles of the circulation of the primary components of the cosmos and the human being in Internal Alchemy (Neidan). 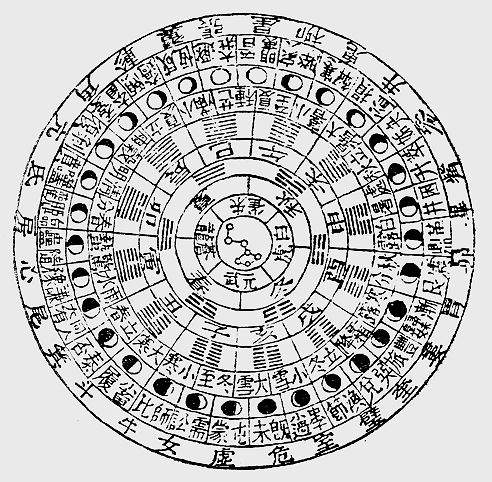 In the innermost circle are shown the seven stars of the Northern Dipper, whose apparent circular motion around its own axis determines orientation (space) and sets in motion the various cycles of time.

From the inner to outer rings, the chart shows:

Qian and Kun (Heaven and Earth) represent the male and female principles that generate the cosmos and support its existence. Kan and Li (the Moon and the Sun) harbor those principles after the cosmos is generated. These four trigrams and hexagrams are at the center of time and space, and therefore do not enter the cycles of time.

The twelve "sovereign hexagrams" in the fifth ring represent the rise and descent of Yin and Yang. This movement, often referred to as "ebb and flow" (xiaoxi), is apparent if the hexagrams are shown in the following way:

There are several charts similar to the one established by Yu Yan. One of them was drawn by Peng Xiao in 947; for a reproduction and analysis see Joseph Needham et al., Science and Civilisation in China, vol. V:5 (Cambridge, 1983), pp. 55-58.