⊛ At the beginning of Yin and Yang, Mystery holds the Yellow Sprout; it is the ruler of the five metals, the River Chariot of the northern direction. 陰陽之始，玄含黃芽，五金之主，北方河車。 (The Seal of the Unity of the Three, sec. 22)

⊛ The Flowing Pearl of Great Yang is Yin within Yang, the River Chariot of the northern direction is Yang within Yin. 〔陽中陰：〕太陽流珠。〔陰中陽：〕北方河車。 (Weng Baoguang, "Model Images of the Golden Elixir", trans. in Taoist Internal Alchemy: An Anthology of Neidan Texts, p. 131)

② The metaphoric “waterwheel” that inverts the downward flow of the Essence (jing) and enables it to begin its upward course along the Lesser Celestial Circuit (xiao zhoutian). See the picture below. 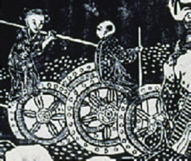 The Waterwheel.
Neijing tu (Chart of the Inner Warp), detail.

③ The metaphoric vehicle that transports the Essence along the Lesser Celestial Circuit. See the picture below. 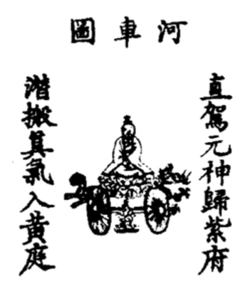 ⊛ The River Chariot dares not stop for one moment, as it enters the summit of Mount Kunlun. 河車不敢暫留停，運入崑崙峰頂。 (Awakening to Reality, "West River Moon", poem 5)

④ A synonym of Lesser Celestial Circuit itself.