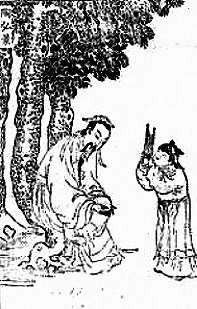 The Taoist master, alchemist, and pharmacologist Tao Hongjing was born in 456 near present-day Nanjing. He served in various positions at the courts of the Liu Song and Qi dynasties until 492. In that year he retired on Mount Mao (Maoshan), the early seat of Shangqing or Highest Clarity, a Taoist tradition based on meditation and visualisation techniques. The retreat he built on the mountain remained the centre of his activities until his death in 536.

After his initiation into Taoism around 485, Tao set himself to recover the original manuscripts, dating from slightly more than one century before, that contained the revelations at the basis of the Shangqing tradition. Tao authenticated and edited those manuscripts, and wrote extended commentaries on them. This undertaking resulted in two works completed in ca. 500, the Zhengao (Declarations of the Perfected) and the Dengzhen yinjue (Concealed Instructions on the Ascent to Perfection, only partially preserved). These and other works make Tao Hongjing into the first systematizer of Shangqing Taoism, of which he became the ninth patriarch.

During his retirement on Mount Mao, Tao Hongjing also worked on the Bencao jing jizhu (Collected Commentaries to the Canonical Pharmacopoeia), a commentary on the earliest known Chinese pharmacopoeia, the Shennong bencao (Canonical Pharmacopoeia of the Divine Husbandman). The original text contained notes on 365 drugs. To these Tao added 365 more, taken from a corpus of writings that he refers to as "Separate Records of Eminent Physicians." Tao's arrangement of the materia medica was innovative. He divided the drugs into six broad categories (minerals, plants, mammals, etc.), and retained the three traditional classes of the Shennong bencao only as subdivisions within each section. In a further group he classified the "drugs that have a name but are no longer used [in pharmacology]." Tao's commentary discusses the nomenclature, notes changes in the geographical distribution, and identifies varieties; it also includes references to the Taoist "Scriptures of the Immortals" (xianjing) and to alchemical practices. With the exception of a manuscript of the preface found at Dunhuang, the Bencao jing jizhu is lost as an independent text, but has been reconstructed based on quotations in later sources.

Since the establishment of the Liang dynasty in 502, Tao enjoyed the favour of Emperor Wu (r. 502-549), on whom he exerted remarkable influence. Shortly later, he began to devote himself to alchemical practices under imperial patronage. His main biographical source, written in the Tang period, has left a vivid account of these endeavours. Along with scriptural sources they testify the importance of alchemy within the Shangqing tradition, which represents the first known instance of close links between alchemy and an established Taoist movement.