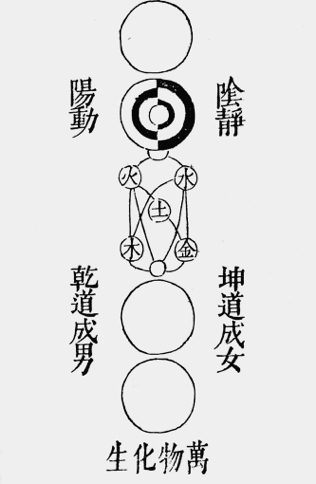 Several cosmological configurations occur between the Dao and the "ten thousand things". These configurations represent different stages in the self-manifestation of the Dao. They are illustrated in the Chart of the Great Ultimate (Taiji tu), which was discussed at length by both Taoist and Neo-Confucian authors. Texts in the ☞ Daozang contain several versions of this chart; the one reproduced here is the best-known version. (See three other versions of this chart.)

On top, the chart depicts the Absolute (wuji, "Ultimateless") as an empty circle.

Below is another circle that represents the Great Ultimate (taiji) as harboring the Two, or Yin and Yang, shown as two semicircles that mirror one another. Each semicircle is made of black (Yin) and white (Yang) lines that enclose each other, to depict Yin containing True Yang and Yang containing True Yin. The empty circle within these lines corresponds to the empty circle on top, alluding to the concept that Yin and Yang are the "function" or the "operation" (yong) of Emptiness, which in turn is their "foundation" or its "core" (ti).

The two pairs of characters on the right and the left of this circle say "Yin is quiescence" and "Yang is movement", respectively.

Following this are the five agents (wuxing), which constitute a further stage in the progressive differentiation from Unity to multiplicity. The lines that connect the five agents to one another show the sequence in which they are generated, namely Wood (木) → Fire (火) → Soil (土) → Metal (金) → Water (水). In the configuration of the five agents, the Great Ultimate is represented by the central Soil (said to have both a "male" and a "female" aspect); it reappears as the small empty circle below, which — if looked attentively — shows the conjunction of Water (水) and Fire (火) ("Great Yin" and "Great Yang") and of Metal (金) and Wood (木) ("Minor Yin" and "Minor Yang"). [For these associations, see a table of the five agents]

Liu Yiming, Xiuzhen biannan (Discussions on the Cultivation of Reality, 1798)

The circle below the five agents represents the conjunction of Heaven and Earth, or the active and passive principles that respectively give birth to and support the existence of the "ten thousand things." On the right and left of the circle are two sentences saying, "The Way of Kun ☷ (Earth) forms the female" and "The Way of Qian ☰ (Heaven) forms the male". This stage, therefore, is represented by the ☞ eight trigrams.

The final state of multiplicity is represented by the circle at the base of the chart. The sentence at the bottom says, "The ten thousand things are born by transformation".